The Georgian period is named after the four successive kinks George I, II, III and IV. Georgian jewellery is rather rare and this for a very simple reason as gold, silver and especially diamonds were scarce and expensive. So, many fine pieces were taken apart to create new ”modern” jewels. The exceptional pieces that have survived are proof of the superb craftsmanship of this period. Typical of this period is the use of garnets, coral topaz and old cut diamonds, mainly rose-cuts and table-cuts. In the 18th Century diamonds were set in closed silver-settings while the interior of the jewels was crafted in gold. As in those days diamonds were scarce jewels were designed to fit the diamonds that were available. In the Georgian era many different styles were produced such as the Rococo style and at the end of the 18th Century the Empire style.

The Victorian period is divided into the Early Victorian or Romantic Period (1837-1860); the Mid Victorian or Grand Period (1860-1885) and the Late or Aesthetic Period (1885-1901)
The Early Victorian Period can be described as a romantic and sentimental time. Based on the Middle Ages and Renaissance styles motifs of nature like flowers, leaves, branches etc. were popular. As a symbol of wisdom and eternity snake and serpent motifs were often used around the 1840’s. During the Early Victorian Period most jewellery was hand crafted but gradually new methods of manufacture during the industrial revolution were used. Many colored stones like amethyst, turqoise, coral etc were used in jewellery as well as rose-cut and brilliant-cut diamonds.During the 19th Century, contrary to silver, jewellers in England were not obliged to use a hallmarking system for gold. Until 1854 18 carat gold was commonly used; after that year the use of 9 carat, 12 carat and 15 carat gold became legal in England.
In the Mid Victorian Period lockets came into fashion; ”they held the memory of a dear one close to the heart. They could contain locks of hair, portraits or early photographs, kept in secret compatments”. After the death of Queen Victoria’s husband, Prince Albert, mourning jewellery became in vogue. A year of ”full mourning”, requiring black jewellery and clothing was followed by a period of half-mourning allowing the use of gray, mauve and purple colours. Since travelling abroad and visiting ancient sites had become easier, jewels in Egyptian and Etruscan style were very popular.
The Late Victorian Period was a prosperous and exciting time. As clothing was lighter than in the previous year, jewellery too became lighter and smaller. Smaller pins scattered on the dress replaced the heavy Victorian brooches; in the evening diamond pins were worn in the hair. Alexandra, Queen Victoria’s daughter-in-law, because of a scar wore choker style necklaces (dogs collar) and so those necklaces became a trend, like pearls, one of her other passions, which made them desirable to the public. Around 1895 the first solitaire rings came into the market. The new source of diamonds in South Africa made those precious stones available to a larger public

In England, at the end of the 19th Century there was a strong reaction against mass produced jewellery brought by mechanization. Simple designs, the use of less precious materials and hand craftsmanship characterize the Arts and Crafts movement. Designs were based on nature and often abstract or symbolic and a preference to the use of silver, copper and brass instead of gold. Enamel was popular but in a simpler form than in Art Nouveau jewels. Due to the high prices the Arts and Crafts period had a rather short life making those jewels very collectible.

The Edwardian style originated in the Late Victorian era where Alexandra, Princess of Wales was a trendsetter. In 1901, Upon the death of Queen Victoria her son, Prince Edward, became King Edward VII and that year is the beginning of the Edwardian Period. Those years are characterized by a revival of the refined style of the French Court at the end of the 18th Century. Jewellery designs were based on the style of that period. The strength of platinum made the creation of delicate, fine jewels, resembling "petit point" embroidery possible. Typical for the Edwardian period is the use of the millegraining technique,  giving a jewel a softer and lighter look. In Edwardian jewellery both Art Nouveau and Art Deco influence is recognizable.Typical jewels of that time are the négligée pendant, the sautoir (or long necklace) quite often made from pearls, star-, ribbon- and bow brooches.The most popular stones were diamonds. But also peridots, amethysts, sapphires, aquamarines and opals were often used. Platinum, in this period  is used to create delicate jewels.

The grandiose and quite recognizable jewels of this period are among the most sought-after collectibles in the world. It began as an creative and artistic reaction against the lack of imagination and creativity of Late Victorian Jewellery. Art Nouveau utilizes organic forms and sinuous lines to create flowing, romantic jewels. ”Lines could be delicate or aggressive; they were flowing, curving, undulating, rippling and dynamic”. Often female figures, dragonflies and butterflies are incorporated. Snakes became symbols of life, eternity and sexuality. Peacocks were perfect for showing the elaborate enamel techniques. The ”plique à jour” technique was perfected. This technique produces an effect like stained glass windows. ”Plique à jour” was already used by Byzantine craftsmen in the 6th Century AD but had become a lost art. Thanks to talented jewellery enamellers, especially the world-famous René Lalique, old enamel techniques were recreated.

World War I  brought a temporary halt to jewellery design.This war also changed the role of women in society. During the war women had taken over the men’s jobs; the start of a great emancipation.It also meant the beginning of the ”Roaring Twenties” and the want by women for quite a different style of jewels. The answer was Art Deco as a reacrtion agianst the romantic jewellery of previous decades. .This style of geometric shapes and lines combined with striking colors and abstract patterns came up to the female wish for a more masculine look. For most Art Deco jewels white gold or platinum was used. Most popular were diamonds. Art Deco diamond solitaires were very popular. Apart from the brilliant cut, baguette-cut, emerald-cut, triangle and shield-cut diamonds were used. For linear accents with the diamonds rubies, ony, sapphires, coral, ivory, emeralds, jade etc. were often used.

Retro Jewellery or Coctail Jewellery as it is sometimes called, originated in France with designs by Van Cleef & Arpels. The produced a collection of jewellery that was exhibited at the 1939 World’s Fair in New York. When the World War II broke out, the jewellery remained in New York. It served as a great influence to American jewellery designers throughout the remainder of the war, Retro jewelelry is recognizable by bold voluminous and three dimensional shapes and the heavy use of highly polished gold, in particular rosé and yellow gold. Large gemstones such as Aquamarines, Citrines, Amethysts and Cabochon-cut sapphires and rubies were used, accented with small sapphires and rubies (natural as well as synthetic) and diamonds. Designs were Deco inspired but often asymmetrical with rounded shapes.Retro jewels reflect the glamour of Hollywood, ”The movies provided a wartime escape into a world of fantasy and romance”. Retro jewellery is very collectible.

Jewellery of the 1950’s is charcacterized by the birth of artistic diversity that set the trend for designs up to this day. In those years there are two main directions in design. The leading jewellery houses and manufacturers stuck to the classic styles while avant garde designers produced a new modernist style. For them ”Creativity and individuality were the slogans of the period”. To serve the growing group of wealthy clientele the famous jewellery houses created opulent and spectacular jewels, richly set with diamonds and other precious stones.Was Retro jewellery solid and heavy, the fifties jewels were open, textural and airy. Suites of matching bracelets, rings, earrings and brooches were in vogue. Painters and sculptors like Salvador Dali, Pablo Picasso, gGorge Braque created abstract jewellery designs. They inspired American Studio Jewellers for their Jewellery as Art (or Wearable Art) designs. During the 1950’s platinum was used again after having been banned for non-military use during Worl War II.

A period of many changes and distinct other styles  followed. Top quality jewels are much sought after. 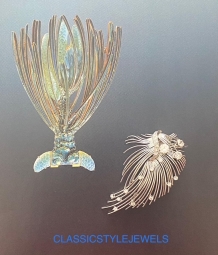